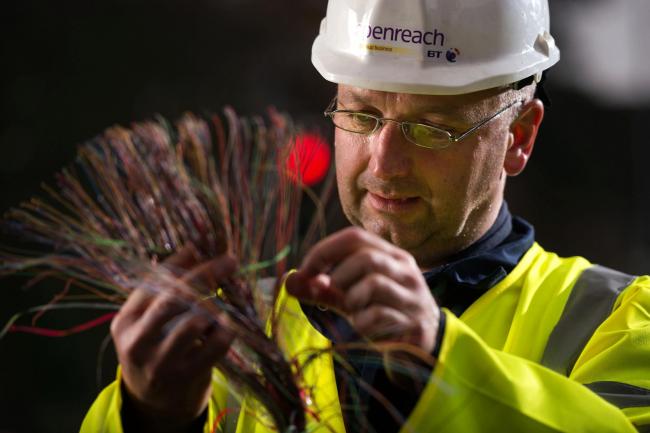 Around three million homes and businesses will be linked up to ultrafast fibre broadband by 2020 as part of BT Openreach’s drive to bolster Britain’s digital infrastructure.

Openreach, which is owned by BT but independently run, said it will recruit 3,000 engineers this year to underpin a vast expansion of the network.

It will target 40 cities, towns and rural areas in the first phase of the programme, which will include London, Edinburgh, Cardiff, Leeds, Liverpool, Manchester, Birmingham

The move boosts its initial target by 50% and puts the firm on track to reach 10 million homes and businesses by 2025.

Clive Selley, Openreach chief executive, said: “We are accelerating our plans to build Fibre To The Premises (FTTP) to three million premises by 2020 which sets the course to reach 10 million by the mid-2020s with the right conditions.

“Working closely with central and local government and our communication provider customers, we will identify the cities, towns and rural areas where we can build a future-proofed, FTTP network that’s capable of delivering gigabit speeds to all homes and businesses at an affordable cost.”

Openreach said it expects the cost of building FTTP across towns and cities over the next three years to be between £300 to £400 per address.

FTTP connections can deliver ultrafast speeds up to one gigabit per second (1Gbps).

In response to the announcement, CityFibre said it would support any effort that helps bring the ultrafast fibre roll-out closer to national coverage.

The broadband infrastructure rival added: “Today’s announcement from Openreach is a clear response to competition from CityFibre and other alternative full fibre infrastructure builders.

“CityFibre and Vodafone is already leading the way, with a long-term strategic partnership that will bring ultrafast gigabit-capable full fibre broadband to up to five million UK homes and businesses, approximately 20% of the UK market, by 2025.”

A TalkTalk spokesman said: “Whilst it’s welcome that Openreach now accepts the need for greater full fibre investment, their plans depend on widespread take-up and eventually forcing customers to buy the product.

“That will only work if Openreach radically reduces proposed pricing, making full fibre affordable to all consumers, rather than just a privileged few. It’s crucial the transition to full fibre is not used to conceal large price rises for customers.”